Please Give To Our Holiday End Of The Year Appeal

Make sure you sign up for the 9th annual Eastchester 5k!

All funds are going to the Bereavement Center!

Runners and walkers of all experience welcome! Make sure you pre-register and receive a free race t-shirt!

Thomas J. Welling passed away peacefully on Saturday, March 26, 2022 at the age of 78. He was joined at his bedside by his adoring wife, Helen and sons, Kurt and Thomas, who are consoled knowing Tom joins Kate, his beloved daughter, in heaven. Tom fought a courageous battle against leukemia over the past few months with the same determination and grace that he lived his life. While we were robbed too early of a remarkable man, we are blessed by the life he led.

Kind and generous, Tom set the standard as a son, a student, track star, entrepreneur, husband, father, grandfather, and friend. Born in Brooklyn, New York on February 10, 1944 to Evelyn and Herbert Welling, he grew up in Greenpoint, Brooklyn with his sisters Diane and Karen, and brother Jim. Tom attended St. Francis Preparatory School, where he excelled as a student and athlete. As an undergraduate at Manhattan College, Tom was one of the most decorated collegiate runners in the history of the college’s Men’s Track and Field program. Tom set multiple course and school records and competed in the New York AAU, National AAU, and NCAA Championship in outdoor track.

In 2017, he was welcomed into the Manhattan College Athletic Hall of Fame. After earning his B.S. in Mathematics in 1965, Tom served in the United States Army Reserve and as a high school math teacher in New York City after which he went into the insurance business. In 1978, Tom founded Welling Associates, which later became GBS Retirement Services, Inc, where he served as President until his retirement in 2002.

Tom enriched the Bronxville community, where he lived since 1981, by serving as a board member for multiple organizations, including: New York – Presbyterian Lawrence Hospital, The Bronxville Historical Society Conservancy, Stellaris Health System, Lawrence Community Health Services, Search for Change, the Bronxville PTA, Public Library, and Siwanoy Country Club. Tom was also a member of the Bronxville Men’s Book Club, Bronxville Non- Partisan Committee, Philanthropic Leadership Council for Children’s Hospital at Montefiore, and Bronxville Derby. Tom served as Chairman of the Lawrence Community Health Services, where he and Helen took particular interest in the work of the Bereavement Center of Westchester.

Tom’s joy came from his family and friends. From summer vacations on Cape Cod, to golf, fishing, and ski trips, Tom wanted nothing more than to see those around him enjoy life and flourish. While admittedly not the best golfer, fisherman or boater, he was able to impart upon his children and grandchildren the lessons that matter – be kind, work-hard and do the right thing.

Tom’s survivors include Helen, his wife of 42 years, his sons Kurt (Chelsey) and Thomas (Erin), his grandchildren Reese, Chase, Caroline, Whitney, Saegan and Ellison, and his sisters Diane and Karen. Katie, Tom and Helen’s daughter, died on April 10, 2005. He was also predeceased by his father Herbert, his mother Evelyn, and his brother, Jim. Tom will be missed and mourned by all who knew him.

Calling hours at the Fred H. McGrath & Son Funeral Home, Bronxville, NY between the hours of 2 to 4pm and 6 to 9pm, Thursday, March 31, 2022. Mass of Christian Burial at the Church of St. Joseph in Bronxville, NY, on Friday, April 1 at 10:45am. In lieu of flowers, please donate to the Bereavement Center of Westchester, 670 White Plains Road, Suite 213, Scarsdale, New York 10583.

A bipartisan group led by two former governors is urging President Biden to help an estimated 167,000 children who have lost parents or caregivers.

Courtney Grund, whose husband died of Covid-19 in August, got an alarming text message last week: Her 16-year-old son was “talking about self-harm,” according to the message, sent by his friend. She quickly signed him up for grief counseling, she said in a tearful interview, using her maiden name to protect his privacy.

John Jackson, a disabled veteran on a fixed income, said he had struggled to find help for his 14-year-old daughter, whose mother died in the pandemic. “I can see it in her, where she’s suffering,” he said.

Pamela Addison, a reading teacher whose husband died, said she felt fortunate that she could afford therapy — $200 a session out of pocket — for her grieving 3-year-old.

Although Congress has allocated trillions of dollars to combat the pandemic, including more than $100 million for existing children’s mental health programs and $122 billion for schools, the Biden administration and lawmakers have not yet created initiatives specifically for the tens of thousands of children who have lost parents and primary caregivers to Covid-19.

“Time to Talk” with Jennifer Graziano focuses on sensitive issues of advanced funeral planning, elder law, and estate planning; sensitive issues that need to be discussed. The talk on May 3rd with Anne-Marie Conlan focused on the grieving process and how it’s been impacted by COVID. Anne-Marie and Jennifer dove into how to support children through their grief with the drastic impact COVID has had on us all.

A Benefit Hosted by The Bereavement Center of Westchester Tree House

Tickets will be available soon!

The Tree House, the flagship service of the Bereavement Center of Westchester is pleased to announce the launch of their new School Outreach awareness and fundraising campaign: Helping The Helpers.

This campaign is tailored for parents of school-aged children and regional educators in Westchester County. Now in its twenty-fifth year, the BCW Tree House has responded when there are death and loss in schools throughout the county.

“When a school experiences the death of a student, a faculty member, a staff member or a cherished parent our ‘Emotional First Responders’ go into trauma and loss situations to help foster psychological healing and resilience,” said Anne Marie Conan, Director of the Tree House.

The campaign features children, schoolteachers and administrators and the questions they often ask in the wake of a school death – “why did she die?” and “will my teacher come back? Questions from teachers like “what should I tell the students and what if I cry on front of the students?”

Take Action in My Community 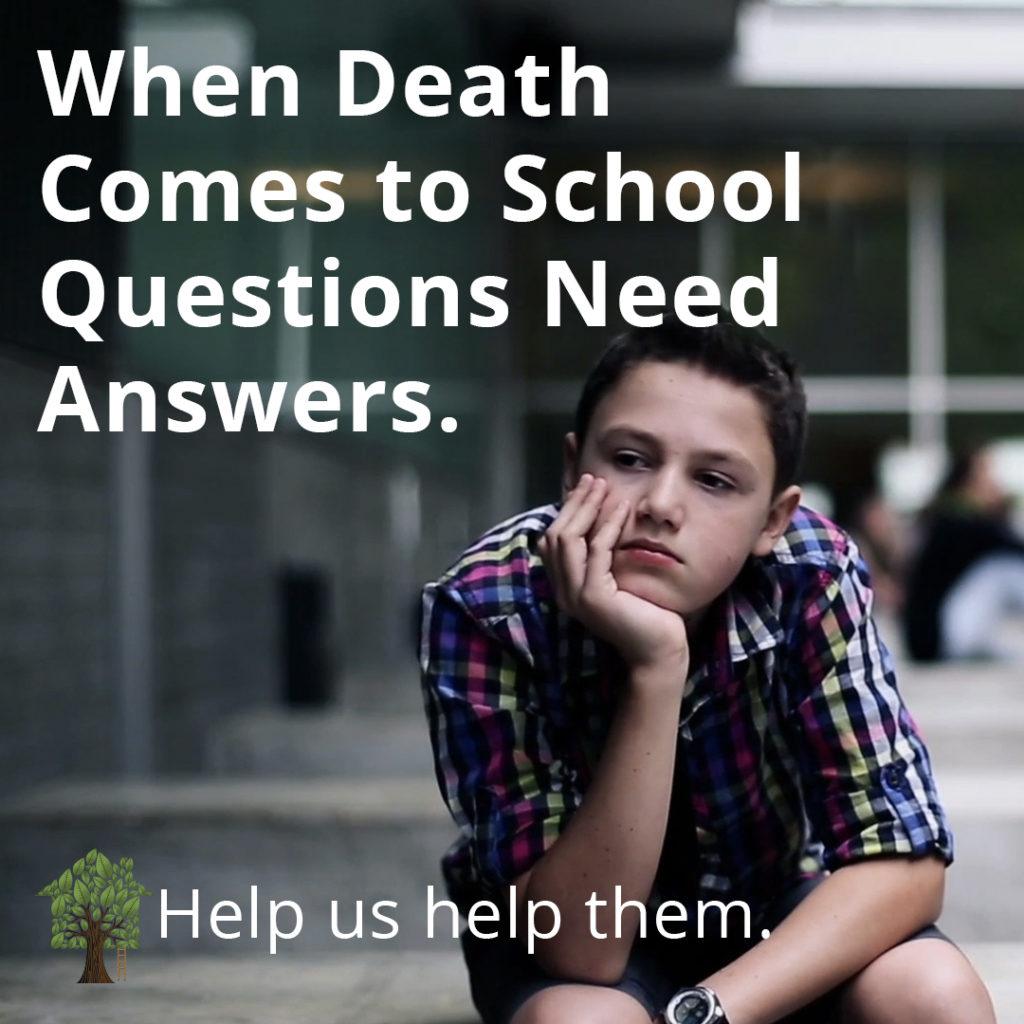 Janet Lyons, head of marketing and development for the BCW Tree House said,

“We have found schools are left vulnerable, and shaken in the wake of a sudden death or crisis. Having trained counselors to help administrators and teachers through the process gives everyone strength, courage and a feeling of comfort and safety. Since I joined the Tree House my goal has been to promote our School Out Reach program. It’s critical to our community that parents and school administrators are aware of the invaluable service the Tree House provides.”

The launch of Helping The Helpers, incorporating emotional images and poignant videos, starts this week throughout Westchester County. The campaign can be viewed on the BCW Tree House website and on numerous social media outlets.

The BCW Tree House is a vital part of New York Presbyterian/Lawrence Hospital and its LCHS outreach to the Westchester Community.

The Tree House program is 100% donor-funded. And its individual counseling programs are provided for a nominal fee.

Help My Neighbors in Need

ABOUT The Tree House:

Since 1995 The Tree House, a cornerstone of the Bereavement Center of Westchester, has provided a safe place for children who are grieving the loss of a parent or sibling. The Tree House was one of the first grief centers in the US created solely for children and their families.

We believe that grief is a personal journey and that each person deserves the opportunity to grieve in a supportive, accepting environment. Our mission is to create a safe and caring environment where both adult and child receive the special attention and support needed to move through the pain of grief toward hope and healing.

“How to Speak Grief”
by
Rebecca Soffer and Gabrielle Birkner

Both authors lost parents as young adults. They have created a vocabulary that addresses the feelings and situations faced by those who have suffered loss and found it hard to explain. Click on their article below from the New York Times to learn their unique language.

This past fall and winter at the BCW were busier than ever. The Tree House programs started back up, responding to the needs of the children and families in our community. We are currently serving over 90 families between our two locations in Bronxville and Mt. Kisco. This past fall we held our annual BCW School Professional Training Workshop and completed our Tree House volunteer training. Twelve new compassionate trainees joined our 47 current dedicated volunteers, some of whom donated extra time to impart their wisdom and experience during the training sessions.

We are always seeking ways to reach individuals and families who may be under-served. In response to the unfortunate rise in deaths due to substance abuse, BCW has recently started a group to support those grieving the loss of loved ones to drugs. Thanks to the grant we received from the New York Life Foundation, we now have a counselor on staff who meets with grieving individuals whose primary language is Spanish and provides support to families through the Tree House programs.

On another front, BCW is moving forward with a major overhaul of our website. I have been working closely with Janet Lyons, Head of Marketing and Development, who is overseeing the project.T he new site will stay true to our brand mission and will be more user-friendly and visually impactful.

Last, but not least, we’ve added some dynamic new members to our Fund Board and are thrilled to move through 2018 with them as our advocates. We welcome Louis Bellantoni, Beth McErlean-Pierce, Guy Morris, Mary Karen O’Shaughnessy and Betsy Putnam.

Thanks to all of you who continue to support us through your generosity, We hope to see you at our second annual (can’t-miss) TREE CHIC event.

BCW/The Tree House would like to thank Pat Woods and Bill McLoughlin, along with all those who participated in or donated to the 8TH Annual Pat Joyce Memorial Basketball Tournament.

Pat Joyce, a local resident and firefighter who died in the line of duty in 2009, was also a volunteer at the Tree House. His friends and family chose to honor his memory with an annual basketball tournament and to donate the proceeds in his name to the BCW/The Tree House. To date, they have raised over $10,000!

The tournament brings together people from many areas of Pat’s life to compete in the game he loved. As a youth he played basketball at St. Margaret’s in Riverdale where the tournament is held. Teams come from all around to participate, including St. Joseph’s in Bronxville where Pat played in the men’s league and Annunciation in Yonkers where he was a firefighter. The finals are held at Fordham Prep where Pat attended high school.

In its 8th year, the tournament continues to draw crowds, including firefighters who come to honor Pat’s sacrifice. Pat Woods and Bill McLoughlin plan to run this wonderful event for years to come in memory of their friend who gave so much to so many.